24may2:00 pm- 4:00 pmEvent OverMusical Improv Quickstart With Steph and Nelson

Looking at fast-tracking yourself or your team into doing musical improv online? Well, this workshop will show you how! Learn how to set up your conference optimally for musical improv,

Looking at fast-tracking yourself or your team into doing musical improv online? Well, this workshop will show you how! Learn how to set up your conference optimally for musical improv, some fast & easy musical warm-ups, and even some games you can do in your show,during rehearsals, or even just for fun!

Stephanie McCollough (Second City Training Center Chicago, iO Chicago, ComedySportz Chicago) – Stephanie McCullough, Psy.D. has a doctorate in Clinical Psychology and practiced for three post-graduate years before tossing it to the wind and touring as the music director for Second City’s BlueCo in 2004. Prior to all of that, she had attended the College Conservatory of Music for her undergraduate degree in Music Composition and Piano performance in Cincinnati, Ohio which helped her decide that she’d never make a living as a musician and changed her career path to psychology in the 1990’s. Stephanie wrote her first piano piece, Clown Waltz in F, at the age of 4 and has been putting together both silly and sincere songs ever since. Moving to Chicago and becoming exposed to the improv scene is what brought her full-circle to making music again on a daily basis. Stephanie has been co-writing musical comedies, averaging one-per-year since 1999, and to some critical acclaim. Four musicals alone were co-written with SC alum Peter Gwinn who went on to be an emmy-award winning writer for The Colbert Report. Her music improv roots began with iO and ComedySportz, and eventually led her to work along side some phenomenal Second City alum like Jim Zulevick and groups like GayCo and The Galileo Players. Stephanie now counts her blessings daily that she has the opportunity to work as a music director, teacher, and composer at the Second City Training Center on a full-time basis. Collaborating on original comedic songs, improvising musical scenes, and being surrounded daily by some of the top comedic and musical talent in this country is a dream-come-true.

Nelson Velazquez (Second City Training Center Chicago, Red Curb Comedy, Salsation Theatre Company, The Tony Stanzas) –
Nelson Velazquez has been involved in improvisational theatre for the last 13 years. He is currently the Artistic Director of Salsation Theatre Company, a 20 year old Latino theatre company specializing in sketch and improv comedy. He currently serves as head musical director for Los Improviachis, an improvised musical mariachi band. He has trained and performed at Second City Training Center, The Annoyance Theatre, and ComedySportz Chicago and has performed with various groups across the country. He’s also a former associate producer for the Chicago Improv Festival. Nelson was also the founder of the improv program at Crown Point Community Theatre and is currently the CEO for Improductions, LLC. He’s taught workshops across the country including The Baltimore Improv Festival, The Chicago Improv Festival, The San Jose Improv Festival, The San Diego Improv Festival The Trill Comedy Festival, Melanin LatinX Comedy Festival, and The Grand Rapids Improv Festival. He is also serves as faculty at Second City Chicago.

Tickets are not available for sale any more for this event! 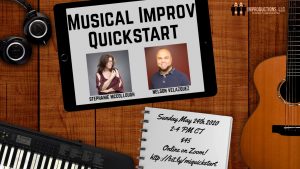